With a total development time of more than 4.5 years, more than 200 CNC milled prototypes built and an overall project volume that exceeds those of the previous NF-F12 and NF-S12A fans combined, the NF-A12x25 has been Noctua’s most intricate fan development project so far. One of the crucial design measures that allows the NF-A12x25 to further improve its renowned predecessors’ performance is its record tight tip clearance (distance between the blade tips and the inside of the frame): whereas most 120mm fans have a clearance of at least 1.5 to 3mm, the NF-A12x25’s ultra-small gap of only 0.5mm sets a new benchmark. This highly ambitious design enables the fan to work more efficiently against back pressure, such as on heatsinks or radiators, because it reduces leak flows through the gap between impeller and frame. However, it also poses novel challenges in manufacturing.

Producing a fan with a tip clearance of only 0.5mm not only requires much higher precision and stricter tolerances in general, but also makes it necessary to tackle creep phenomena that are irrelevant for fans with a bigger tip clearance. Over extended periods of use and thermal cycling, axial fan impellers undergo minute creep deformations due to the centrifugal forces pulling the mass outwards, which result in minute increases of the fan’s diameter. 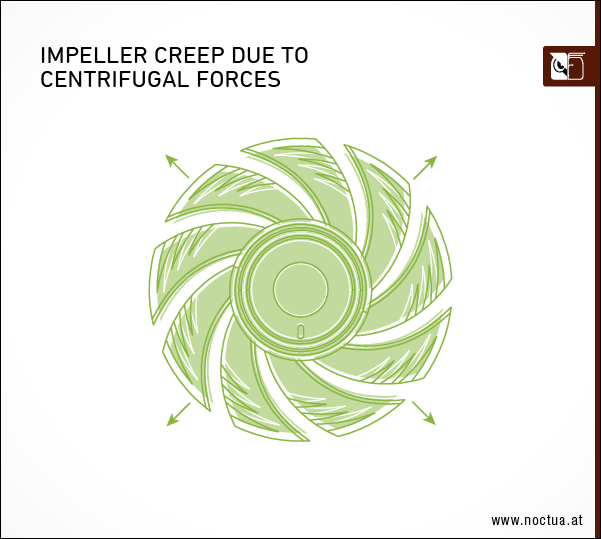 For example, the impeller of a typical 120mm fan made from standard PBT can become larger by as much as 0.2mm over several years of usage. With fans that have a larger tip clearance, e.g. 2mm, this is not a problem, but with a tip clearance as small as 0.5mm, impeller creep becomes a major issue and even a 0.2mm creep will result in a high risk of the blades making contact with the frame if there is any minute vibration or imbalance.

In order for these challenges to be met, Noctua has taken several different measures that, from a manufacturing point of view, make the NF-A12x25 the most advanced and most elaborate Noctua fan to date. Firstly, the centrepiece of the NF-A12x25’s motor hub is made entirely from steel in order to reinforce the outer plastic structure. At the same time, the axle mount has been reinforced with an additional brass piece in order to stiffen the joint between axis and impeller. In combination, both measures assure reduced tolerances and increased stability in the critical hub area. 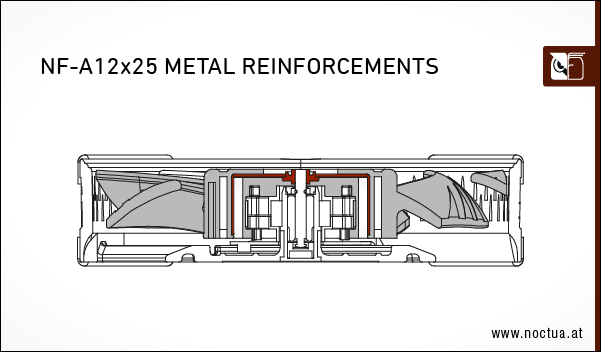 The key to overcoming the impeller creep issues, however, was the development of Sterrox®, a novel liquid-crystal polymer (LCP) type material that has much better dimensional stability and less creep as compared to conventional engineering thermoplastics such as ABS, PA, PBT or PC. The name Sterrox® is derived from the Greek word στερρός, which means stiff, firm, solid, hard or rugged.

Liquid crystal polymers possess remarkable chemical and mechanical properties, such as high tensile strength and environmental inertia, that make them ideal for high-end medical and military applications with demanding requirements and budgets that can support the high material cost (roughly four times as high as PBT). The most well-known LCP is Kevlar, which is being used in products such as bulletproof vests, combat helmets and other body armour due to its excellent strength-to-weight ratio.

The remarkable mechanical rigidity of LCP materials is due to their unique molecular structure: unlike conventional polymers, which have a chaotic molecular chain orientation both in solid form and in the melt phase, thermotrophic LCPs such as Sterrox® show an ordered, rod-like molecular alignment even in the melt phase and solidify into a highly oriented, extremely rigid chain structure, which gives them much more advanced mechanical properties. 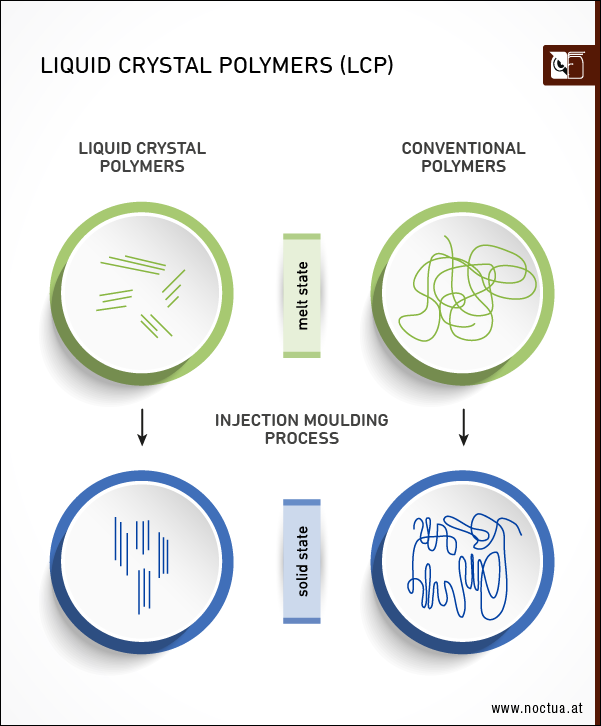 Sterrox® is Noctua’s own customised type of fibre-glass reinforced LCP that has been specifically fine-tuned for use in next-generation fan designs such as the NF-A12x25. Its extreme tensile strength, exceptionally low thermal expansion coefficient, high environmental inertia and excellent dimensional stability have made it possible to reduce impeller creep phenomena to levels that were previously unthinkable with PBT- or PA-based impellers. 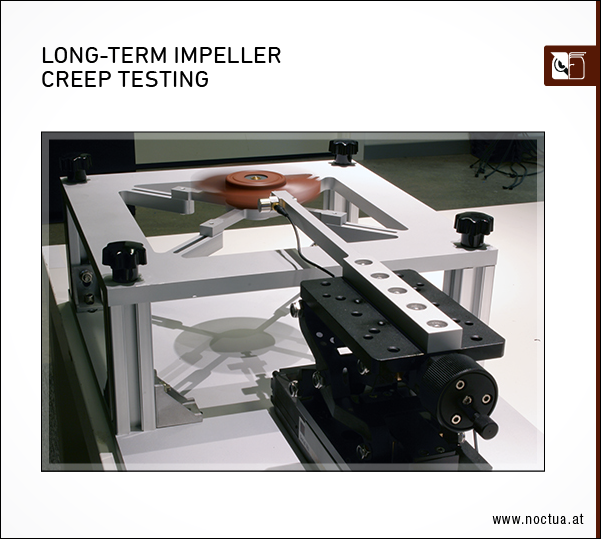 In addition to permitting fan designs with much lower tip clearances, Sterrox® provides a second key advantage in having an elasticity modulus and damping properties that are ideal for reducing resonance and vibration phenomena in advanced fan blade designs such as the NF-A12x25. In particular, the use of Sterrox® allows the suppression of a phenomenon called blade surface mode vibration: a fan impeller has a natural frequency and multiple resonant modes. When the fan is running, the turbulent air around the fan blades will transfer vibration energy into the blades and cause resonant vibrations. 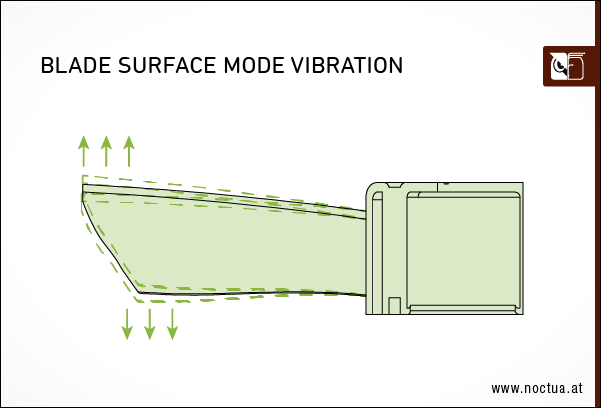 These surface vibrations are so minute that they are not critical from a mechanical point of view (unlike e.g. vibrations due to imbalance), but they can cause serious acoustic problems. The reason for this is that when the fan is running, there is a pressure difference between the intake and the outlet side of the fan (lower pressure on the upside of the blades, higher pressure on the downside of the blades). From an aero-acoustic point of view, this situation is similar to a stereo speaker where there is higher pressure inside the chassis and lower pressure outside the chassis. In both cases, the pressure difference leads to an efficient acoustic coupling, so the surface vibration of either the blades of the fan or the membrane of the speaker is transferred to the air. While this acoustic effect is desirable in the case of the speaker, avoiding it is crucial for fine-tuning the sound signature of advanced fan blade designs and this is where the increased stiffness and improved damping properties of the Sterrox® LCP material come in: when comparing the same fan blade design made from PBT and Sterrox® and measuring their surface vibrations with a contactless Doppler laser vibrometer, the Sterrox® impeller damps the same vibration excitement much quicker. 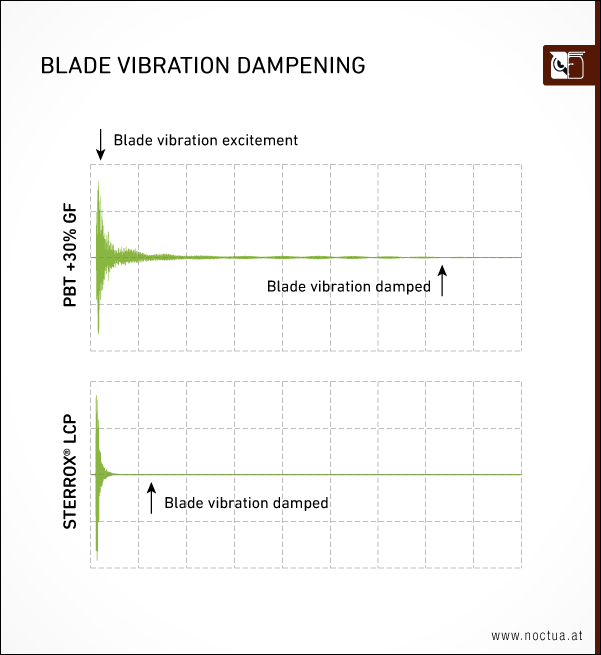 In real-world usage, this means that less vibration from air turbulence is transferred to the fan blades and, consequently, fewer surface mode vibrations are transferred back to the air as noise, which significantly contributes to the NF-A12x25’s smooth acoustic profile. 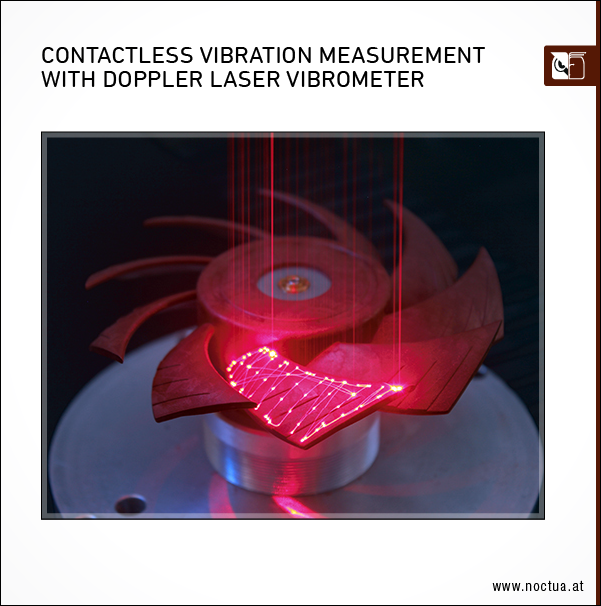