The pressure-optimized Nine Blade Design of the NF-P12 (P stands for pressure, power and performance) has been specifically developed for high-impedance applications such as CPU coolers, water-cooling radiators, power supplies or cases with restrictive fan grills. It achieves outstanding static pressure and high airflow at very low noise levels.

While most conventional 120mm rotors possess seven comparably narrow fan blades, the NF-P12's Nine-Blade Design uses nine large, closely spaced blades with a relatively low angle of attack in order to achieve maximum static pressure and high airflow. As a result, the NF-P12 provides no less than 1.68 mm H2O at 1300 rpm, which is something that other fans merely achieve at 1600 rpm or more. 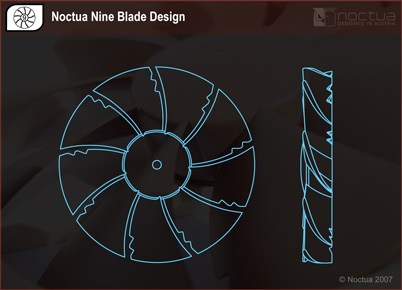 As a matter of principle, increasing the number of blades involves the risk of increasing the aerodynamic noise in general and noises caused by rotor-stator interaction in particular. Basically, an increase in static pressure usually brings about higher noise emissions. In the case of the NF-P12, this problem is dealt with by adding Vortex-Control Notches to the blades' trailing edges. Due to the two notches at the trailing edge, the flows along the suction and pressure side mix more smoothly. This allows for less turbulence and velocity loss, which leads to a significant reduction in noise emission as well as increased efficiency. In order to achieve the smoothest possible transition and maximum noise reduction, the Vortex-Control Notches are rounded in shape. 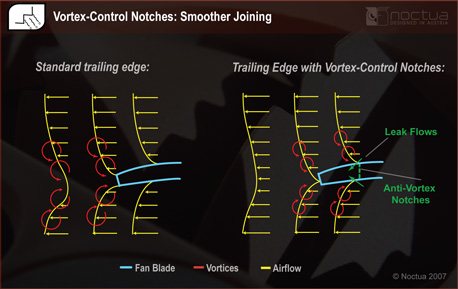 In addition to optimizing the joining of the flows at the trailing edge, the Vortex-Control Notches fulfil the task of psychoacoustic optimization: Due to the Vortex-Control Notches, trailing edge vortices are split up into several smaller vortices. Thus the noise is spread over a wider range of frequencies and therefore perceived as much less annoying. 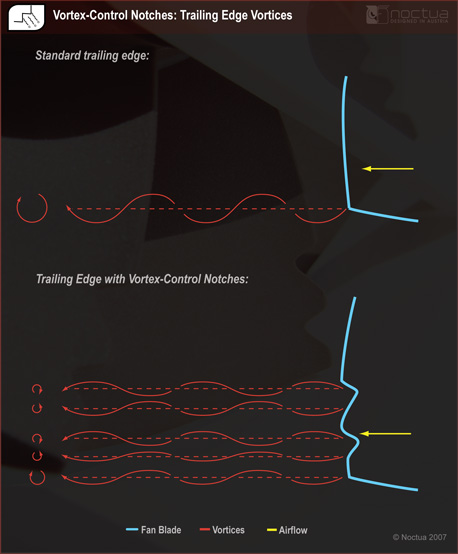 The Vortex-Control Notches' effect of psychoacoustic optimization is further enhanced by the staggering of the notches. The Vortex-Control Notches are staggered from blade to blade so that each blade creates a different vortex pattern. As a result, the fan's noise emission is better spread over the frequency spectrum and thereby makes it yet more pleasant to the human ear. 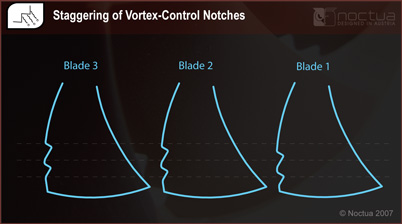 Which fan is right for me?