“With its highly rigid polyamide construction and IP67-class water and dust protection, the industrialPPC line has opened up a wealth of new industrial markets for us since its introduction in 2014,” explains Roland Mossig (Noctua CEO). “True to the industrialPPC’s tagline of ‘Protected Performance Cooling’, we have now also toughened up these fans from an electronics point of view so that they are equally well protected against environmental and electrical hazards.”

The new NE-FD4 motor driver IC used in the Q100 revision models complies with the Automotive Electronics Council’s highly rigorous AEC-Q100 failure-mechanism-based stress test qualification for integrated circuits. Meeting the AEC-Q100 standard’s stringent requirements for burst and surge protection, the new fans’ electrical robustness permits them to be used not only in automotive projects but also in other harsh environments with transients from electric motors and other inductive switching loads.

At the same time, the fans’ voltage-stabilised inrush current suppression provides a smooth power-up and dramatically reduces power line transients that otherwise could affect other electronic components connected to the power line. This makes the fans safe to use in sensitive electronic environments.

Except for the new NE-FD4 IC and its enhanced electronic compatibility, the specifications and features remain unchanged from those of the previous 24V industrialPPC models. For example, the fans feature the same IP67 class water and dust protection, SSO2 bearings, more than 150,000 hours MTTF and 6 years’ warranty. Like the previous 24V models, the new Q100 revision fans will come in 120mm (NF-F12) and 140mm (NF-A14) sizes and both 2000rpm and 3000rpm variants:

Prices and availability
The fans are already shipping and will be available shortly. The suggested retail price remains unchanged at EUR 29.90/USD 34.90 for all models. 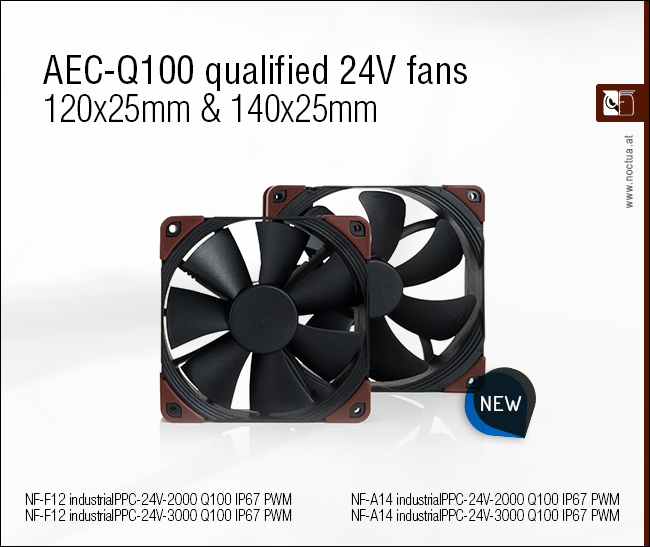