While most axial fans use single-phase motors with 4 slots, Noctua’s industrialPPC fans feature a three-phase design with 6 slots, which provides smoother transitions between the slots and thus allows for even higher running smoothness, further reduced vibrations and unprecedented energy efficiency. 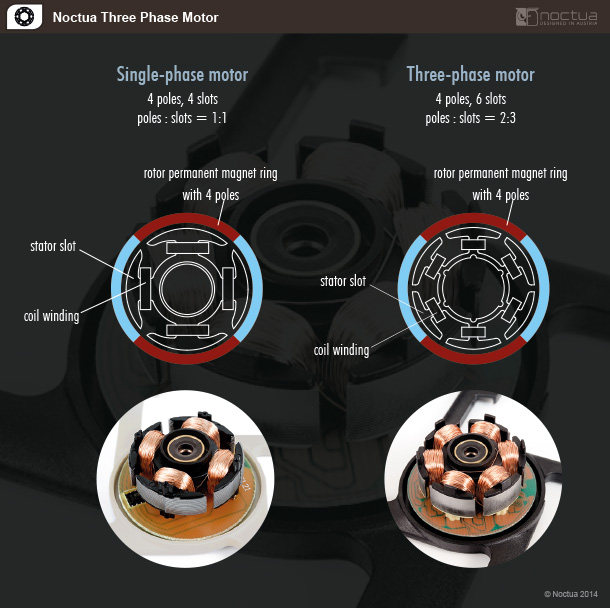 Typical single phase axial fan motors have 4 stator slots and a permanent magnet rotor ring with 4 poles. This configuration results in a 1:1 ratio between slots and poles. When the first pair of slot coils are powered up, the poles of the rotor magnet align with them. At the next stage, the second pair of coils is powered and the poles of the rotor magnet will turn by 90° to align. While motor torque is high when the rotor poles are between the stator slots (45°), it drops off when the poles are aligned (90°) and only goes up again when the poles are between the next set of slots (135°). 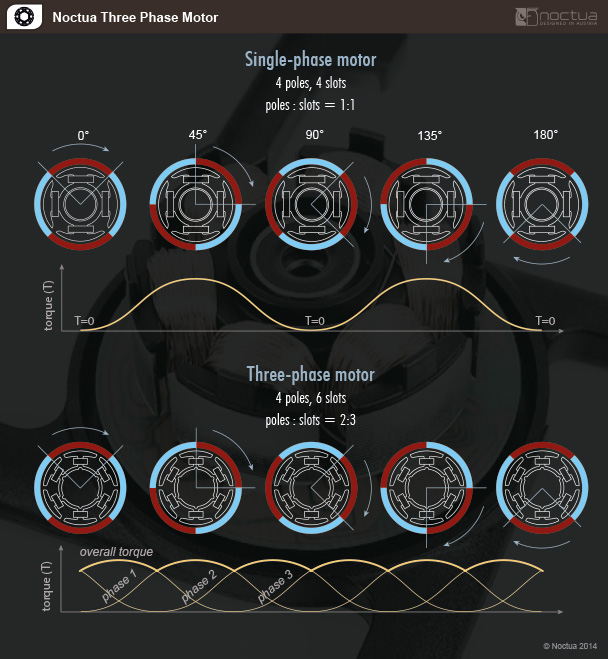 Noctua’s three phase motor has 6 stator slots and a permanent magnet rotor ring with 4 poles, which results in a 3:2 ratio between slots and poles. This configuration has two key advantages: Firstly, due to the higher amount of slots and the slots being grouped in three rather than in two pairs, the switching between the slots occurs at a higher frequency, so torque variations are generally more evened out. Secondly and more importantly though, due to the uneven ratio between slots and poles, poles and slots always overlap. As there is no situation where all the poles and slots align, there is no situation where torque drops off completely and where the fan spins only from momentum until torque kicks in again. Rather than having a single reoccurring drive phase with torque dropping off in between the peaks, the motor has three overlapping phases that all contribute to the overall torque. As a result, there is much less variation in overall torque compared to standard single-phase motors. This more continuous, steady torque profile results in generally improved running smoothness, a significant reduction in torque-borne vibrations and a further reduction in energy consumption.

While Noctua’s NE-FD1 equipped NF-F12 and NF-A14 retail fans are amongst the most energy efficient fans in their classes, the industrialPPC versions with three-phase motors and NE-FD2 IC are even more efficient by around 10%: For example, the standard retail version of NF-A14 requires about 2.25W to run at 2000rpm whereas the industrialPPC version requires only 2.0W at the same speed. This further reduction in power consumption makes the industrialPPC fans ideal for various fields such as automotive industries, aeronautics or home appliances where, more and more often, energy efficiency is a key factor.