“The synthesis of our custom-engineered unified heatsink and Noctua’s famously whisper-quiet fan technology forges a creation that is more than the sum of its parts,” said Kent Chien (Corporate Vice President and General Manager of the ASUS Multimedia Business Unit). “This inspiring partnership with a world-class leader in DIY PC cooling establishes a noise level breakthrough for the powerhouse GeForce RTX 3080 Noctua Edition graphics card -- and a visual style that you won’t find anywhere else.”

“The response on the first Noctua Edition graphics card was simply overwhelming, so we’ve been thrilled to continue our cooperation with ASUS”, says Roland Mossig (Noctua CEO), “The GeForce RTX 3080 with its heat emission of up to 340W is an entirely different beast to tame than the GeForce RTX 3070, but leveraging our fan technology and a customised heatsink, we have once again managed to create a card that combines serious GPU power with excellent quietness of operation.”

Like the GeForce RTX 3070 Noctua Edition, the GeForce RTX 3080 model features a dual BIOS that enables customers to switch between a performance profile that provides the lowest GPU temperatures and a quiet profile that allows slightly higher temperatures in order to achieve the best possible acoustics. Catering to the demands of Noctua’s customers, the quiet profile is set as the default.

The GeForce RTX 3080 Noctua Edition features a semi-passive fan control setup (ASUS 0dB technology) that can switch the fans off completely whenever the GPU temperature goes below 50°C. This means that in typical configurations with low to moderate ambient temperatures and well-ventilated cases, the card can run entirely fanless at lower GPU loads such as during office productivity tasks, web browsing, or even light gaming. Even at high GPU loads such as during gaming or benchmarking, the fan speeds will stay extremely low as long as the ambient temperature inside the case isn’t excessive.

In summary, the ASUS GeForce RTX 3080 Noctua Edition is the ideal card for quiet cooling enthusiasts who demand serious GPU performance without sacrificing quietness of operation. 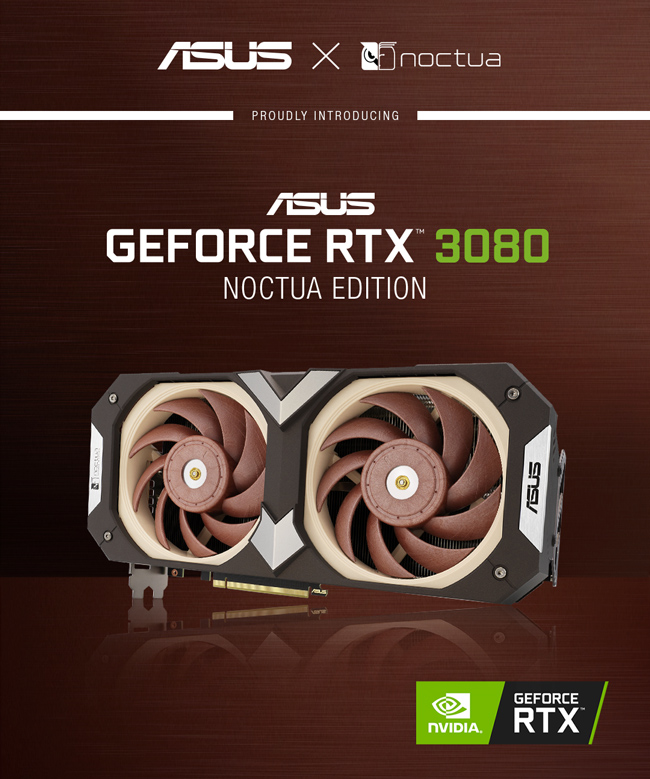 About ASUS
Established in 1989, ASUS is a multinational company known for the world’s best motherboards and high-quality personal computers, monitors, graphics cards, routers and other technology solutions. Today, ASUS is designing and building next-generation smart technologies to provide incredible experiences that enhance the lives of people everywhere.